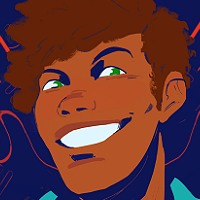 Izzy chats with his co-workers.

It wasn't supposed to be pretty. Izzy leaned elbows on the last shopping cart in the stack he'd just finished, gazing off at the soft peach-smeared glow of sunset sinking behind the garbage transfer station. But it was.

Izzy didn't mind his job, actually. Other people might think it wasn't punk, but they could think that. Money was money, and there were worse jobs. He liked it out here, Big Sky Country, clouds stretched wide across the parking lot, drifting calmly between the dilapidated elevated subway bridge and the forever under-reconstruction expressway, a corroded black streak swiping high through the sunset. On the north side of the parking lot, the asphalt tumbled right into the famously and locally-belovedly poisonous Gowanus Canal. If he stood by the loading bay, he could idly watch his "co-workers," as he sometimes thought of them, loud and busy, mixing concrete and pulverizing scrap metal on the other side of the canal. A few times a day, the drawbridge under the expressway would go up, and he'd be treated with the entertainment of watching angry commuters honk while a barge floated inexorably and slowly by.

It wasn't so bad.

But he knew when he'd been reassigned out here to wrangle shopping carts that his boss didn't think it was a reward. Izzy was aware he was the too-wild cat that the owners put outside, but he didn't really mind, anymore. Alley cats had all the freedom in the world.

He had a lot of time to think out here, about songs and his plans for the band and that vacant warehouse right across the canal that a guy he knew had access to. He was pretty sure it would make a great practice space if he could swing it for the band.

It could be lonely out here when business was slow, but the schedule was predictable. There would always be the rush of stressed after-school moms with Baby on Board stickers and too many kids with not enough dads. In the mornings there would be his favorite customers, the elderly, and he would always make sure to hurry, long-legged, over to help them with their carts and even their groceries, if they wanted him to.

But everyone needed groceries.

Izzy always knew when paychecks came in, and the days food stamp benefits were issued were always the busiest of the month. And he understood that, even when people were rude.

He wasn't good with customers inside the store, and not with his co-workers, either; he was too short-tempered to be stuck with them all day, especially when half his co-workers seemed to live for petty drama alone. But out here he could handle.

As companions, Izzy had the thick multicolored flocks of pigeons who congregated in the parking lot, and sometimes a stray cat or two that he'd sneak cans of the supermarket's finest No Frills cat food that he could afford to behind the loading bay, but he especially liked the seagulls. They wheeled overhead of the parking lot all day, catching the wind off the bay and sailing impossibly like kites, white floating freedom high in the sky.

And when they came back down, they were angry screaming punks slam-dancing over the pieces of crab shells they'd dropped from the sky. It was relatable.

The store would probably want him back in the loading area to do something or other soon, but nobody had come looking for him yet, so Izzy climbed onto the side of a cart corral, fishing a packet of vending-machine pretzels out of the hoodie pocket under his reflective vest and crumbling them in an arc around him. As the birds hurried towards him, he leaned back on his gloved hands, looking down proudly at his faithful audience.

"Last time I was telling you all about the Ramones," he began. "And previously I've told you the stories of a lot of other punk greats." He gave the gulls a significant look, dragging out a pause for anticipation. "But now I think you're ready to hear about New York's newest and greatest punk band..."

RIP Pathmark. The (rare in Brooklyn these days: affordable) supermarket this is based on is gone now: the store got flooded in Hurricane Sandy in 2012 and was fully rebuilt, only for the chain to go out of business in 2015. Now I think they use the parking lot for used cars or something like that, and I'm sure someday, like everything else around here, the building will be torn down for whoever wants to buy luxury condos next to a Superfund site.

I always thought the area was beautiful in its own way, though, and so does Izzy.