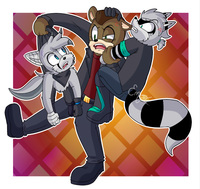 Short story about how The gang met Ranger and Cassey C: And of how Bosko lost his bike of course.

It was a peaceful, sunny day at the shrine where Emerald and her friends spent their days.Emerald was at the top of the shrine brooming away debris and making sure the Bijou was clean.
Bosko was out polishing his bike and having a smoke while Dawn brought them ice-cold tea. Drayven wasn’t much of an outside sunny person, so he stayed inside most of the time.

The gang stopped what they were doing upon hearing something rustling through the forest. From it came heavy stomping and some dorky giggling. The shrine was in a really deserted and isolated area, so coming across visitors was really uncommon. The gang looked at each other in confusion. From out of the bushes emerged a large brown bear wearing a black jacket with a flat top and a small female Koala with white hair and big nerdy glasses riding his shoulder.

“What in the fuck?” murmured Bosko as he slowly walked up to them.

She put her fist near her chest waiting in suspense. The big burly bear and the koala went silent looking down at the raccoon. “Hey! Hi there, I think you’re in the wrong area, this is private property and we’d appreciate it if you just went back that way and – “

The bear grabbed Bosko from his collar and lifted him about 2 feet up in the air. “Put me down you stupid bear!” shouted Bosko struggling to free himself but to no avail.  The bear brought him close, ripped the cigarette from his mouth and stomped on it. He spoke in a really heavy foreign accent.

“No smoke. Is bad for the environment. You ruin ‘da flowers.” He dropped Bosko who landed on his bum. The bear and koala spoke in a language Bosko couldn’t understand then laughed in unison.

“What’s your problem, asshole?!” Bosko got up, dusted himself off and pushed the bear. He didn’t even move an inch. The enormous bear stared down angrily at the raccoon. He whispered something to the koala who jumped off his shoulder and walked over to Emerald and Dawn.  The girls looked at her wondering what she wanted. She smiled revealing her shiny braces and spoke in a nasal-y voice.

“Hi! My name is Cassey, What’s your name?!” She smiled awkwardly at them.
Emerald and Dawn looked at each other but proceeded to introduce themselves.

“I’m Dawn...” said the girls.
“Nice to meet ‘cha! Is that guy your friend?” Said Cassey pointing to Bosko who was flailing his arms around at the bear.  The girls nodded.

“Well, your friend is mean and Ranger is about to kick his butt.” The girls gasped in unison. Out in the field Ranger fisted his hands together and tried to hammer down but Bosko dodged. They got closer and closer to the shrine.  “Oh no! Be careful Bosko!!” Cried Dawn.

Cassey yelled out to Ranger.  “Yeah, you show him, Ranger!! Give him the ol ‘One, Two!”

Dawn scoffed and looked at her.  “Tell your boyfriend to stop! He’s going to hurt Bosko!”

Cassey looked at Dawn shocked and her face glowed a bright red. “H-He’s not my boyfriend!”

“Whatever just make him stop!” Dawn said hunching her shoulders with her fists balled up.

“No way! He totally deserves it!” said Cassey.

“You Bitch!” Dawn jumped on Cassey and started pulling her hair. Cassey began to yell.

“Guys! Guys, stop!” Emerald tried to intervene but they couldn’t hear her over all the commotion.

“Get off me, Blyat!” Said Cassey trying to reach out for her glasses who had fallen onto the floor.

“Not until you make him stop!” demanded Dawn Pulling on her hair even harder.

“Guys please stop! Can’t we settle this another way?!” Tried emerald once more to convince them through the grunts and yells. She looked back and Bosko and Ranger who were also throwing punches and wrestling on the grass. Cassey called out to Ranger.

“Da!” He yelled looking back at her and nodding his head. Ranger got up, and ran towards Bosko’s bike, and lifted it with his bear strength.

“MY BIKE!” Yelled out Bosko who was near the entrance of the shrine.
Ranger turned and looked at him grunting and saying something in Araissian. Ranger flung the bike toward Bosko who dodged and didn’t see Drayven coming out from the shrine.

“What the hell are you guys yelling about?” Asked Drayven unaware of the bike that was flying toward him.

“Drayven Move!” Cried Emerald. Drayven turned to look at Emerald and saw the bike coming toward him. He didn’t react in time and got hit by the bike which dragged him several feet.

Bosko gasped loudly and dramatically looking at the wreckage. “Oh no!” He ran toward his friend. He knelt down next to him. “Are you okay!?”  He lifted the bike off his friend.

Bosko glared at Drayven and said “Not you, you idiot! The Bike! Why didn’t you catch it!?” Drayven sighed and gave him a look of disapproval. Bosko cried over his bike which was leaking gas and oil from multiple places with flat tires and misshapen parts of steel. Drayven looked over at Ranger who was breathing heavily. “Hey I know you; you were Acher’s bodyguard!” Said Drayven picking himself up. Bosko looked at Ranger with bewilderment.

“Hey yeah! Let’s get him!” shouted Bosko lifting his right sleeve. “You are ‘de’ idiots responsible for Acher’s Death?! I Kill You!” said Ranger as he charged after the two boys. He picked up Drayven and then Bosko jumped on him and began to bite his ear. Emerald had enough! She used her chaos lock on Cassey and lifted her away from Dawn.

“Hey let me go, Cyka! She wriggled around in the air being held by Emerald’s green orb. Emerald tried to lift Ranger but he was too big to lift. She sighed and pouted. “Guess we’re doing this the old-fashioned way…” She walked up behind Ranger and kicked him in the groin. Ranger instantly dropped the boys and curled up on the floor gasping for air and groaning.

“Stop fighting!” Shrieked Emerald. Everyone looked at Emerald, her angry side was scary and they didn’t want to mess with her. “Let’s try this again.Hi, I’m Emerald..”