Xuanji is a Xianxia world, its lore and story were created by calisto.
This is a private world, the only way to join it is to be personally invited.

Xīng Guān is the heart and soul of the heaven realm. They enforce their rules since Heaven has no true emperor. The Heaven is divided into five sections, the north, the east, the south, the west and the center. Xīng Guān itself rules the center, while the guardians rule over the other four sections. Tianxiu was born in Heaven and has had the power of deities since birth. An enigma to the spirit realm, as well as the mortal world, Tianxiu belongs to neither. Although born to one of the most revered families of heaven, it was his father’s role as the Guardian of the East that set his destiny in the Xīng Guāns Order. As the descendant of the Dragon of the East, he was immersed in the order’s culture. He knew the necessity of skills and abilities of Wu Xia, the determination of life and death, but above all, he learned the wisdom of Xīng Guān. He meditated and studied throughout his childhood and was considered exemplary by all of his teachers. His closest friend, the only one who could match him in practice bouts, was Jie Kaili, the White Tiger of the West. They grew up as brothers. Tianxiu could turn to Kaili for a fresh perspective on any matter. The two became known as the Xīng Guān Order's most promising students.

During his education, Tianxiu had to stay in the Xīng Guān domain. He never visited home, even when the words of his dying father reached him. As Kaili convinced Tianxiu to explore the outside of the Xīng Guān main sector, without authorization from the teachers, Tianxiu met the Lunar goddess, Changxi. Tianxiu, a seven-year-old brat, was blown away by her beauty (and white-blue hair). Changxi remained in his mind like no other. Later on, the Xīng Guān guardian found them and brought Kaili and Tianxiu back to the heart of the temple.

In the Thousand-year War between the heavenly realm and the subterranean realm, the four guardians served the heaven realm as generals. The war started before Tianxiu and Kaili reached their maturity, while other Guardians, the Black Warrior and the Vermillion Phoenix, already reached their maturation. While Tianxiu was a competent warrior, his genius lay not only in fighting battles, but also in planning them. His strategic foresight became legendary. In war, he was always a dozen moves ahead of the enemy, able to predict their movements and reactions, pinpointing the exact moment to push the attack or pull back. A genius man who took his responsibilities incredibly seriously, he often refused to rest as he planned and replanned his troop movements and battle dispositions until they were perfect. He was loved and respected by all who served in his legions. He, alongside the Vermillion Phoenix, guided the armies of the heavens to countless victories. His sworn brother, Jie Kaili and the Black Warrior often served on the front lines of these battles. During the war, a Thunderstorm is created when both Tianxiu and Kaili are around, the enemies would know their presence and would often retreat with fear. The four guardians quickly garnered an aura of invincibility. As the name implied, the war raged for a thousand years. In the end, the heaven realm won and brought peace back to all realms. Centuries passed, and Tianxiu nearly forgot his old life and former purpose, lie in a perpetual dormant state.

The Azure Dragon / Guardian of the East 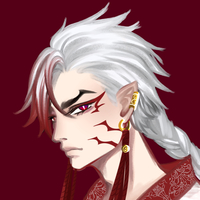 The White Tiger / Guardian of the West The Vermillion Phoenix / Guardian of the South

The Black Warrior / Guardian of the North