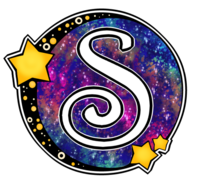 BACKGROUND ||      Once upon a time, there was a lonely witch floating in the vastness of space. The universe was their canvas, stars born at their command, galaxies spun into existence as they wished, clouds of nebulae shaped to their every ambitious whim. But although many worlds became populated under their watchful eye, their many spells were becoming a burden, and loneliness continued to seep into their bones. Then it struck them; instead of waiting for companionship to come to them, why not create it? And so Starriears appeared in the void, small, numerous, full of magic and the light of stars.

RULES ||
All Starriear owners can join, but MYO's must be approved. Be nice to everyone, respectful of rules, and keep things PG-13 when posting publicly within the World.
SPECIES+TRADE/RESALE RULES | COMMUNITY/ROLEPLAY RULES

SPECIES INFORMATION ||
Magical buns in space! What do they do? How do they act? Where do they come from? Let's find out!
STARRIEAR FACTOIDS | TRAIT/RARITY GUIDE| STARRIEAR MASTERLIST