fysa is a magic which affects the physical realm

Fysa is a magic which exists in all of the world of Orrison, and it is said to be the energy of the sleeping godling, Fys. There are eight elements to this magic, each associated with a different essence of the god's body: Divine, Ash, Blood, Marrow, Alloy, Clay, Clear, and Murk. Most living creatures on Orrison can harness Fysa naturally in their own ways, but are only attuned to one element. 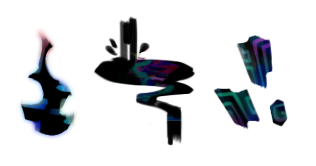 In its pure form, Fysa is a black iridescent substance, like an oil slick. It can be gaseous, liquid, or solid. Fysa is vital to life, but the amount of Fysa gained by eating plants or animals is enough-- Fysa contains energy, and too much is destructive to cells of the body and can kill. Symptoms of Fysa poisoning are jitters, raised body temperature, swelling, nausea, and insomnia.

Fysa can be safely stored in gemstones, but only when Aria is also present to temper it. Like radiation, Fysa's influence creates many changes and mutations in species. Physical traits of species tend to also influence the physical traits of other species.

The divine element is the rarest and includes spiritual and clairvoyant abilities. It is an element that serves as the opposite to the tangible ash element, encompassing will, fate, luck, and soul.

The ash element includes physical "aspects" of the world (light, fire, water, earth, and air) and is the most common element. Its users can manipulate one or several of these aspects to their will. Ash is the counterpart to the intangible divine element.

The clear element is a purgative magic. It negates other elements. Clear attuned creatures often involve filtering of fysa or changing its forms. Clear is opposite of murk.

The murk element is the most unrefined element, and is identified by its energy excess. Murk can often amplify the effects of other magics, or overpower others by sheer force. Murk is the opposite of clear.

The blood element is one of two types of change elements. Blood is known as a healing element, one that takes advantage of and encourages the natural functions of the body. It can speed the body healing itself, as well as fast-forward and rewind growth. Blood is the opposite of marrow.

The marrow element is one of two types of change elements. Marrow represents adaptation and change against the natural order of things. Marrow users are often shapeshifters, between either set or various forms and they shift with emotion. Marrow is the opposite of blood.

The alloy element is one of two types of progress elements. Alloy-ists conduct fysa through themselves to create something new. It includes the creation of plasts. Alloy is the opposite of clay.

The clay element is one of two types of progress elements. Clay species absorb fysa and tend to be aggressively adaptive, changing their bodies over time to encompass new abilities. Clay is the opposite of alloy.

aria is a magic which affects the dream realm

All living creatures exist on two realms simultaneously- a physical realm and a spiritual realm. Aria exists in the dream realm, where spirit resides, and it can shape to whatever a dreamer desires. In most scenarios, Aria is not tangible or discernible unless in extremely high concentrations. 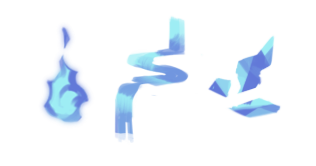 Aria also has a solid, liquid, and gaseous form, and resembles iridescent crystals like quartz. Being an essence of the mind, there are no divided elements.

Aria can cancel out Fysa, but it can also generate Fysa under certain circumstances (and vice versa). Imbibing a tiny amount of Aria can also allow a person to withstand more Fysa and enhance their powers, but too much will smother the Fysa in their bodies and can kill them. Symptoms of Aria poisoning are hallucination, lowered body temperature, dizziness, and numbness.

three ways to use and study both fysa and aria

Magic can work as an energy source in lieu of electricity or heat, and can easily be conducted using metals such as gold, silver, and copper. Jewels also work as resistors or batteries. This allows it to be worked into circuits, where the shape of glyphs in the circuits controls the effect of the magic.

Many of the known glyphs have been lost to time (or destroyed on purpose to prevent people from using them for evil), however many are being rediscovered. There is a high demand for composed magic, as glyphs & circuits allow the creation of things such as lights, heating, conditioning, and plumbing.

Anyone can use and study composed magic.

Natural magic refers to the inherent fysa abilities of any species-- for example, a chimia absorbing light or a rrex practicing divination. It even includes flora and fauna- a glowbug glowing by using fysa, for example.

Naturalists are those who seek to strengthen their inherent abilities, such as chimia practicing hard light structures (an advanced fysa), or those who seek to use the fysa of the world around them (somoene who harnesses glowbugs and studies them).

Even imbibing in flora and fauna can enhance or affect the natural abilities of any creature. Naturalists often make potions, elixers, ethers, and other things which help or hurt others.

The effect each person is able to harness depends on the person themselves-- their personality, their history, the shape of their soul... A human is essentially a unique glyph, with its own effect. The effect can be nearly anything, but a human only gets one. It can also grow or change over time-- but one can't always control the changes.

Synthetic magic can either be used immediately (a human shooting water out their fingertip) or applied to a charm (a charm which spouts water endlessly when anyone uses it). It can be a physical effect, or an ethereal effect (luck charms, wards, etc).

All three magics together can create artifacts. A human creates a device using composed magic, using the body parts of slain creatures studied through naturalist magic, and applies their own intent and will to it using synthetic magic.

Artifacts are immensely strong. This is a forbidden practice.