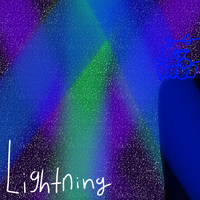 Lightning is a chill night club run by 2 rave confonsters(species by Stakota)named elytra and sykr.

Menu at the night club

Sykr and elytra both work at a night club, its usally pretty chill there and safer, music is 70s-90s music, and they have no alcohol. Sykr does alot of the work there, and elytra helps out mostly. Sykr does handle weapons alot, and will use them if needed at the place. Elytra is the kind of person who would watch the scene and do nothing about it.

The place is okay for all ages, but suitable for 13+, though minors have to have supprevision with them to enter! Sykr and elytra usally are pretty good pals, and talk to other at the club too. Theyve made some mutals there.

There is alot of cool stuff there, but there best known for there good food, and they cook very well!

They occasionaly do music requests were other people can request new music to be put on but it cant be rap or trap music since some people may get uncomfortable.

The place is usally calm and chill, dark with some neon lights and people can dance, sing and more! Its a pretty friendly place, but sometimes people come in and attack

Thats were sykr comes in and beats the shit out of em with any weapon they have(gun,mashete,knife, or even tossing a table and using fists)

Elytra usally doesnt fight and is more laid back and would watch the scene doing nothing.

They do comedy shows every now and then, to give laughs n stuff.

They do celebrate others birthdays if someone comes in on there birthday with free cake and elytra gives them a balloon with there favorite color and shape.

The lights are usally purple,blue,green and orange with a black atmosphere. It smells like febreeze and its spacey.

At times, elytra does attack, but tends to use what they have like tables,knives,cups,kitchen stuff,ect. At times they do get seriously injured but get helped.

If you wanna add your character to the night club here feel free to! Have fun and elytra and sykr welcomes ya :D🎇✨🌟