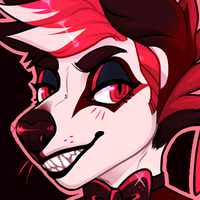 Friends: N/A yet - ! Always open for friendships !
Family: N/A
Partner: N/A but you can ask!

Random Facts:
- He doesn't like to be touched other than handshakes, pats on the shoulder sometimes,
very rare cases he'll accept hugs from very specific people.
- Extremely selective with people he likes
- Speaks High [Brit-English & American-English],  French, German and his native ancient demon language
- A high rank demon cinna with fascinating abilities
- Posh upper class like Core & Arturo
- Doesn't mention or talk about his sexuality much, but he isn't in the closet about it either,
despite the timezone he lived in for so long being rather bigoted. It seems to only be known when someone
he finds attractive is around at the time