Somewhere, no one really knows exactly where, there is a vast and beautiful valley. Home to over 14,000 people, the valley is prosperous and thriving, and that is solely due to the valley's reigning deity, Jiang. An elemental god, Jiang cares for the valley by blessing his devotees with healthy crops, bountiful harvests, and fields brimming full of rice, flowers, and tea.

In addition to blessing the valley's inhabitants, Jiang is also responsible for the magic protecting the valley. Encased in a magical bubble, the valley has existed for thousands of years, undisturbed by time, and generally out of both sight and mind by the outside public. Despite the rest of the world being in our current modern time, the valley is all but archaic, boasting no technology of any sort, reflecting a very old, traditional way of living. Money does not exist in the valley; communities work together to provide for everyone's needs, and barter for the things outside of that. Visitors sometimes come to the valley, usually finding it by accident, and they're never dismissed unless they pose any kind of threat, or bring malicious energy with them, which Jiang can sense instantly. Despite having been exposed to bits of tech here and there, the valley's residents don't seem all that interested in having it for themselves. It's usually perceived as a novelty, at best. This is a relief to Jiang, because once the valley starts to advance, they will have less of a need or want for him, and he will fade away into nothingness, and will be unable to keep them safe anymore. It's a delicate balance, one that he maintains very well, but always keeps an eye on.

Outside of his duties as a deity and guardian, Jiang is a very pleasant individual to be around. He has no mouth and cannot speak, but the valley's inhabitants understand the clicking he makes with his fingertips, or the special, nuanced ripples he can make in his own water. Jiang believes that every life is precious, even those of animals, fish, and insects, and he will strive to maintain that gentle balance, even though he knows that the humans need to eat other creatures to survive.

He loves music, though he can't play many instruments. He does, however, dance extremely beautifully, and loves being draped in silks during festivals and dancing to the music being played. While he doesn't eat or drink, Jiang loves the fragrance of tea, and it's not uncommon for people to have a fresh cup steeped for him at most of his shrines as a daily offering. 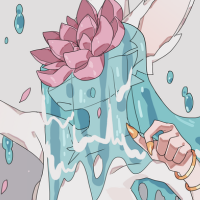