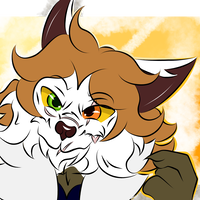 I'll try to give you love until the day you drop! Marvin is a friendly, but reserved jackalwolf! Born in Texas, moved to Germany, then later moved to England, Marvin has had a fairly rocky life. He lives with his partner, Severus, and is the father of two young puppycats. Marvin is a scientist, he specializes mainly in robotics and computers. In his spare time he enjoys video games, gardening, and writing. He's not very social, but has a big and kind heart.

Marvin has worked hard to achieve his goals. All his life he had shown great interest in how electronics worked, which led him to pursuing careers in robotics and computers. Marvin is rather succesful in his field. Marvin tends to be very awkward around strangers and new people, something that is rather off-putting at first. Marvin never means any harm, though. He is very friendly and has a big heart. Although he can be intimidating to a lot of people because of his height. Marvin loves to write and has a lot of stories written! He has no plans to release any of them to the public, though, and it's just a hobby.

Marvin is a jackal and wolf mix, he's 6'8 tall. He has a scar that covers his left eye (our right). He has a bit of a dad bod, he can be drawn either stocky or chubby, but please don't draw him thin. He can be drawn in any of the outfits on his ref, you can even make up your own outfits for him, as long as they fit his character! He's also fluffy!

He is a sweetheart, a loving friend, a great partner. Shy and awkward around strangers but when he warms up to you he would do anything for you. A bit of the nerdy type, Marvin loves computers and robotics. Marvin has two children and is a wonderful father.

Marvin was born in Texas in 1987 to parents Leena Hallei and Christian King. Raised primarily by Leena, as Christian was distant and often cruel. Marvin has no fond memories of his father. Christian passed away when Marvin was 10, and he was raised by Leena alone since then. Leena moved with a young Marvin to Germany. When Marvin was 16, his baby brother was born. Marvin loves his brother dearly. Marvin moved out when he was 21 and moved down to England to pursue his online partner at the time.

The relationship went poorly. Marvin was broken up with and thrown out not even 3 months into the relationship. He spent the next few weeks couch surfing, until he met Severus Dantès at a bar. Severus felt pity for the young canine, and offered him a place to stay until things got better. Eventually the two fell for each other and entered a relationship, they have been together since.

Severus is Marvin's spouse! They are incredibly close and love each other dearly.

Leena is Marvin's mother, the two have reconnected and Marvin loves and cares deeply for his mother.