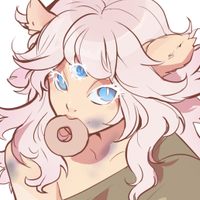 Formerly known as specimen-1137, Mur grew up on a space station ran by scientists who used him for experiments that he never had explained to him. He was always obedient and docile when being handled, not wanting to incur their wrath, and grew up completely believing that this was normal and nothing about any of this was in any way wrong.

Being one of the more harmless residents on the station, Mur was granted permission to wander around the station at his leisure. Security droids were needed elsewhere, and the anklet he wore tracked his movements, so free roam was easier for specimens with his nature. Mur was told that this was a privilege, and if he wanted to keep it, he would need to continue being compliant to them, which he of course agreed to. He was allowed to eat in the station's cafeteria where employees and other specimens like him ate their meals, and he grew particularly fond of donuts.

His room was nothing but the bare minimum-- a simple dresser, and a bed with a pillow attached to it, both bearing a vinyl-like cover for easy cleaning. Mur was told that if he continued being good, he would be given a blanket someday, so that's something he was always working towards.

In his roaming about the station, Mur eventually came across a creature, specimen-2285, which was unlike any he'd ever seen; a big, grotesque, borderline monster held in one of the cells. He was so fascinated by it that he came to visit it often, and the two eventually began to grow familiar with each other. Mur would slip donuts through the hatch in its door, giving it little snacks, which it seemed to like.

It wasn't until a couple months later that the facility was attacked, and in the midst of the chaos, specimen-2285 was able to break free. It found Mur, injured in his room, and carried him with it. The two escaped on one of the invader's ships, which had been emptied of soldiers, and they were finally free. Specimen-2285's little murmurs and trills granted them both their names: Mur, and Brumer.

They live together on board a new ship, suited for their needs, but they're strangers in a strange universe. Mur has only ever known life on the station, not even knowing what his own species is, and he hasn't been able to find out anything about Brumer's species either. He's just quietly biding their time, knowing that they'll run out of money at some point, and he's not sure what will happen after that.