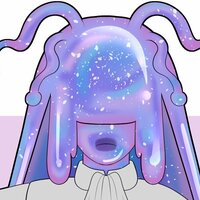 [unnamed 38] is an Exobiologist specializing in what what humans call "food webs".

165cm tall, she could be significantly taller - but on the outer ring, finds she has enough trouble keeping her hair from dragging on the ground. On the Inner ring, or the main ship, it's knee length.

The style she's fallen into could be interpreted as "Victorian Goth".

Not being part of the military, she can't really be punished for following the letter of an order, but not the spirit - which is why she doesn't bother with eyes or a nose. Human hair in this position would obviously obscure them, so why bother, right?

She wants to eat a horse. Not horse meat - an entire horse. Yes, this would be seen as weird by her fellow crewmates.

To clarify; under current orders, everyone is to asume human shape as their duties allow. This includes stuff like "eating with your mouth" - but really, if a goo alien can surround a thing completely, digestion is pretty much automatic. [unnamed 38] would eat all the big earth animals if she though she could fit them in - but would take her chances on actually being able to fit in a horse - even if it would keep her unable to even stand for a week.