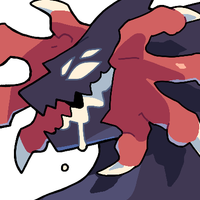 a neutral beast who's had enough of the champions that come to Tiernon to play in the Great Game of the Gods, and how they tend to destroy the planet every damn time a new game starts. So teaming up with groups of like minded individuals, they're setting out to get rid of the new games contestants one way or the other. forming a villain group in the process, since they've stopped caring for how the champions are dealt with, as long as they're gone.

Abzi is highly inteligent but lives a mostly feral type of life, no need for housing or steady meals, as they hunt and live in the nature that is still left untouched by players.

Abzi is half exposed meat/muscle, and half black-iron scales. His meaty parts do not secrete fluids and isn't slimy to the touch, but instead much like a hairless cat. very smooth and for some odd reason, soft?Touching said meaty parts also doesn't hurt him, and just feelsthe same as if someone touched his scales.
the hands around his throat are actually wings that are hyper articulated, they can and will reach out and grab you as if they were hands. They either rest around his throat like a type of plume, or around his chest disguising themselves as a type of ribcage.