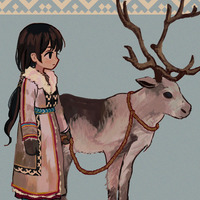 the guardian of a herd of giant reindeer, perhaps the last non-human animals on earth.

as human civilization broke apart, the remainders of a wildlife reserve in siberia thrived alone. they have learned to subsist off of mushroom-like clusters of fungi that feed on the remains of human population centers.

eiko herself is quiet and prefers to be alone. she likes to explore, though she is quite cautious with her actions. an experienced survivalist.

she cannot speak english, and instead speaks an indigenous language taught to her by her parents. it is similar to the tounge of the nenets people, but it has evolved since the present day.