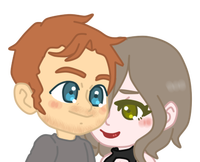 Headcanons between Peter and Estelle

"Are you trying to get yourself killed?" Peter yelling his concern when Estelle runs into battle

Shut Up and Dance - Walk the Moon

Tears for Fears - Everybody wants to rule the world

Lyrics:
There's a room where the light won't find you
Holding hands while the walls come tumbling down
When they do, I'll be right behind you
So glad we've almost made it
So sad they had to fade it
Everybody wants to rule the world

Simple Plan - What if?