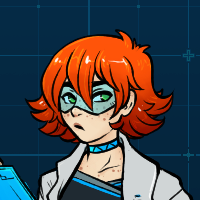 "The only ones who have ever hurt me are humans."

Random Facts:
- Born Cait Wolfe, Peter is transgender. He is pre-op and has no current plans to surgically transition.
- Is very fond of muscular... partners.
- Not always the most ethical, Peter is willing to do back-alley jobs.
- Constantly risking his career and knows more strays (and more about strays) than he probably should.

Peter will always do what he feels is right, even if it puts himself in danger. He has a bad habit of getting mixed up with Stray activity and back-alley dealings, especially medically. He is focused and goal oriented, but quiet and often soft. His gentle nature has caused others to understimate him, only to discover Peter doesn't take shit from anyone.

From a young age, Peter showed great promise in the medical field. An only child to a family of doctors, it was expected he would be brilliant. Peter's desire to be Peter caused some friction in his family, especially when he showed no interest in physically changing himself. Tensions eased when he moved into his own apartment at 16, but his outward changes eventually estranged his parents. He often doesn't see or hear from them outside of a professional setting, though they always seem eager to claim his successes. Peter considers his Pokemon partners family, and tends to have trouble trusting other human passengers.

While not Peter's first partner, Event is closest to Peter out of all of his pokemon. They share a fondness for each other that often makes others... uncomfortable, and leaves them questioning just howclose Peter is with his partners. It's hard to tell if there's something more there between them, or if it's merely Peter's inability to socialize normally with other humans that makes it seem so odd. Event is very protective of Peter, and tends to take on a bodyguard role, especially when dealing with risky activity involving Strays.

Pokemon: Zoroark
Link to the registry:Soon...

Smoke was a later addition to Peter's team, rehomed after the then Zorua failed to get along with a particularly troublesome Vulpix named Voice. Despite the risky nature of some of Peter's life, Smoke seems far more at home here, and has taken a liking to Peter and fellow partners.

Peter's first pokemon partner, Advice is often the most logical of the crew, and is very helpful in planning out risky undertakings to ensure Peter's safety and to keep the red head out of trouble with the law.