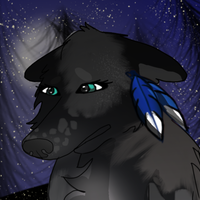 Aleu's cost is a faded black with with silver markings all over her body. She has Aqua eyes and often wears blue jay feathers which she got from her first mate.
Sᴛʀᴇɴɢᴛʜ┇50/100

❝ I am not a stranger to the dark Hide away, they say 'Cause we don't want your broken parts I've learned to be ashamed of all my scars Run away, they say No one'll love you as you are ❞ -Keala Settle

¤Aleu is very closed off. She does not like getting close to other wolves or animals in fear of hurting them. She often over thinks things and if put in a stressful situation, will turn tail and run. In fight or flight, she'll always pick flight.

⌈ғᴀᴍɪʟʏ⌉ ¤Aleu used to be very close with her mother and father. But after the fight, she has not spoken to them. She had two brothers who were killed by bobcats at a young age.

⌈ʟᴏᴠᴇ ʜɪsᴛᴏʀʏ⌉ ¤Aleu's first mate was named Alpine. After his death, she has not taken another mate.

⌈ᴏғғsᴘʀɪɴɢ⌉ ¤Aleu was expecting a litter with Alpine, but the pups died inside her during a fight.

⌈ғʀɪᴇɴᴅ/ғᴏᴇs⌉ Aleu never had any real friends her whole life, mostly keeping to herself and spending her time alone.

⌈ᴘᴀsᴛ⌉ Aleu was born to a medium size back that lived in a forest in a mountain. Her life was okay. She lost her two brothers to some bobcats when she was only a month old, but besides that. Her time when she was young was spent with her family or on her own. When Aleu became of age to take a mate, she was hesitant. But one day, during a mating moon(where multiple packs come together to help the of age wolves mind mates), she bumped into a handsome young wolf named Alpine. To her surprise, he took an interest in her and by the end of the night, they had mated. While it's traditional for the females to join the males backs, Alpine insisted on joining Aleu's pack instead. They spent their time hunting and cuddling together. Soon, Aleu found out she was pregnant and they were overjoyed. But her life wasn't going to be such a happily ever after. Turns our, during that mating moon, another wolf had his eyes on Aleu. His name was Kodiak and he wanted Aleu to be his mate. But before he got the chance, Alpine and Aleu has met. After loosing Aleu to Alpine, Kodiak grew enraged and started plotting against them. He overthrew his alpha and started recruiting rogues, preparing for a war. Rumor of this spread and days before the attack, Aleu's pack was told by an neighboring pack. They started to prepare, sending the pups, elders, and weaker pack members away to a safe place. The strongest stayed to fight. Aleu wanted to stay, but since she was pregnant, was sent away as well. Not liking the fact that her pack was fighting a war over her while she was hiding away, she snuck back to the pack camp. When she got there, the fighting had already started. She joined in the fight, taking down multiple wolves before loosing stamina. Everything was a blur of snarls and pelts. Soon, Aleu was hiding in the bushes away from the battle, unable to move as her stomach hurt badly. She started to fear for her pups, when suddenly a large shadow loomed over her. She looked up in fear at the one who started this all. Kodiak. Aleu tried to get away from him, but the main in her body made her movements slower than usual. Soon, he had her pinned, laughing. He said he'd stop the fighting if she agreed to be his mate. Before she could answer, Alpine jumped out of the bushes, tackling Kodiak away from Aleu. Everything happened in a flash. One moment it looked like Alpine was going to overpower the Kodiak and end this fight, but while tearing back to strike the final blow, Alpine suddenly frozen, whole body trembling. He fell away from Alpine, stumbling into the clearing. The fighting stopped at the sight of him coughing and choking. Aleu tried to rush to his side, but Kodiak blocked her way, eyes still on Alpine. Everyone watched in silence as the young wolf fall to the ground, body twitching a bit before falling still. Aleu screamed in agony as her mate lay lifeless in the clearing as Kodiak laughed. Turns out, Kodiak had coated his claws in death berry juice. When he was fighting Alpine, he had managed to get it into his bloodstream. With the poison in his blood, it didn't take long for it to spread through his body and kill him. While Kodiak was looking down on Alpine's dead body in success, Aleu snapped. She charged Kodiak, taking him by surprise and pinning him to the ground. Seeming almost feral, she started tearing at him until he was barely moving, covered in blood. The sight of what they thought was their dead leader made the rogues flee. Covered in Kodiak's blood, Aleu stepped away from his unconscious body and towards Alpine. But her path was once again blocked, this time by her parents and the alphas. They claimed that she had caused the death of Alpine by disobeying orders and returning to the camp during the fight. She had also put exposing the hiding spot of all the pups and elders by leaving. The alpha had blamed her completely for the war and the death of Alpine, and because of this, she was banished from the pack. She looked to her parents, but they would not look at her. Devastated, she turned and ran. Ran away from her pack. Ran away from all she's ever known. Ran away from her mate's dead body. And ran towards a lonely life of solitude and loneliness. While the pack was distracted by Aleu's banishment, Kodiak has woken up and managed to limp away to safety. He was quickly found by some of his fleeing pack mates and taken home to recover. Aleu now lives alone, roaming around where she must to survive. She avoids packs and will often ignore any other Rogues or Loners she meets.

❝ Would you believe That I've always wished I could be some other wolf? Yet I can't see What I need to do to be the wolf I want to be.❞ -Chantal Strand