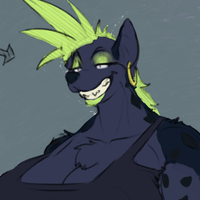 orignally created by Scwhoo on FA as a sketch https://www.furaffinity.net/user/schwoo

She's a blunt, Rowdy, sex-addicted party animal, who loves to get high.

in true yeena fashion she has full control over genitalia(and its size ) ,but also her mass although the largest recorded size is 12ft 5in


Being a child in the Slums Shindel was quite the cheerful soul. always on her best behavior, never one to question authorities, and looking for the best in even the worst of Romeyette's citizens.
However, she had few Friends during grade school; aside from other Hyena, for most befriending the future Queen of "Yeen town" (a community within Romyette), as most folk held  Hyena in low regard alongside the scavengers of the world. From these actions Shindel eventually took note and An emptiness for the world flooded her heart.

when she was 11  things took a heavy turn.
After a trip to the planet Zaurbos, Shindel's grandmother Beethovia would be murdered in her own home.
Beethovia And Shindel spent much time bonding like inseparable best friends, Shindel looking to Beethovia as more of a sassy big sis, yet Granny was quite flattered knowing this.
Beethovia had taught Shindel how to defend herself,  handle the mean slum streets, and how she had once ruled the large stretch of area herself in her younger years.

Little Shindel would snap during granny's funeral. With her parents nowhere to be found, (father was off on a contract deep into space, while mother was too obsessed with her new job.)
Shindel was left to grieve with members of the family who were already not fond of her  or her parents. Shindel's rage  began to boil over, soon that rage filled the dark empty pit inside her heart where a few strands of happiness still reside. What was once sweet, now bittered by the cold harshness of the world.

After having a realization of the world, her ravenous hatred towards man's(people & beast) heart carried over into school life. Teachers who tried to discipline the overgrown child were met with fierce tantrums. Most who dealt with her wrath  feared her and soon one by one turned a blind eye to her devious actions.
Durning this time she became notorious as this school's top bully.
(their are rumors of children going missing after attempting to stand up against her... Girls gotta get her protein somewhere)

At age 15, because of her adult size Shindel joined an underground fight ring. Where From the ashes of despair, betrayal, and grief, The tyrant Queen was born.  A nickname that  was bestowed upon her, as she would let off her steam through the bodies and faces of the combating challengers.. well victims. Many perished at her hands, some even becoming food to fuel her rage.
3 years passed and During her last title match Shindel was pitted against a smaller female, who had shown promise earlier that week. Shindel normally could handle opponents like her; The  confident and ballsy type. However, after severely underestimating her opponent , Shindel became enraged. The few blows she suffered were intense from someone so small compared to her. Although in the end her final match would end in a draw. Taking this as her sign to leave the ring life, letting her fully set her sights on the outside world.


Shindel now  21, 10 years since Beethovia passed; The residents of "Yeen Town" became accustomed to the violence and carnage caused by Shindel, the rivaling gangs, and those who looked to claim the lower city sector. Shindel however, is not one to let go of her empire so easily. Using dirty tactics to keep her hold of her turf, These acts included :

- Gun running
- voracious activities - ☠️
- Extortion and the like
- Blackmailing
- Ect.
Just to name a few.

She is shameless in her execution of actions (or of others). With a punch so unnaturally strong, Shindel can turn anyone into a puddle of blood and flesh if she isn't being mindful (most times she isn't even caring). Her foes, even those who had potential to take the Queen down, tread carefully in her wake. To them she was a loose cannon, a hothead ready to rumble in a snap.
It was clear to all rivals and enforcement, that " messing with Shindel.. Is taking a hefty chance… with your life.."

Throughout her reign over the small sector, her heart longed for the one who showed her kindness, many years ago.
A small little blue off-worlder named Plasmite. A few weeks after her 21st birthday, her scout Oak, would report that she met a blue being that had fit the stories Shindel once talked of.  Some time after oaks Report,  Shindel would pass by and see that instead of tentacles/tendrils , the pup had grown golden locs of long flowing hair. (  https://www.furaffinity.net/view/41720441 )
For her this was pure luck (and possibly fate) having a weird way of bringing them together.

For the first time since Beethovia's death, Shindel smiled bashfully with thoughts of what she would do to him as well. the fear of rejection **Never** even crossed her mind.

- Shindel can grow in size , However she will have to eat a lot once back to normal size. The last known size increase was roughly 2 - 2.5x normal size.
-  She has an extreme and genuine love interest for plasmite , anyone else is to be considered a plaything ( engage at your own Demise ).
only  sugar & Peaches ,AKA the " Sugared Peaches " ( yes its an internal sex joke )  are known to have survived multiple Poundings from her
- It's obvious shindel has a fully functional set of cock and balls, but she also has a working womb  hidden under her sweaty orbs. ( Tldr, she can manipulate her genitals at will  with complete control of her size, mass, and type)
- Q: would shindel crush/ stomp/smother /consume me?
A: Yes! without hesitation. She is always looking for someone to tease and mess with (or even eat). ** Note you are at her mercy **

- Q: would shindel date me?
A:  conically  she would " go on a date " with you for a fun time or free food (take that how you wish)

Being both dog & cat like while being unique like her hyena brothers and sisters, shindel tends to hide aspects of herself such as:

While highlighting her more aggressive or deemed unwanted aspects more easily such as: