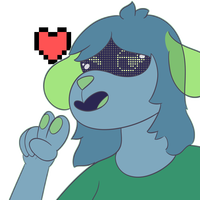 A toy robot dog character inspired by the Poo-Chi toys from the early 2000s. She's made of plastic (with some of her being translucent green plastic) and doesn't have visible mechanical joints but seems to move just fine anyway. The green plastic can light up, either deliberately, when her nose is booped (it's a button!) or when she gets too excited. Her name derives from "cathode" which was one of the few LED-related words I could make into a decent name.

She can use her screen face to display whatever she likes, though she typically does just use it for eyes.