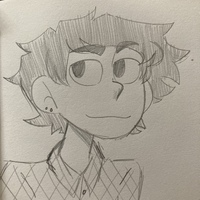 NAME: Quentin Jacob Cooper
AGE: 18
SPECIES: Boar-human
BIRTHDAY: April 24 (Taurus)
PRONOUNS: He/him
SEXUALITY: Asexual
HEIGHT: 6'
PERSONALITY: He is very trusting and can always see the good in people. A real philanthropist. He loves his brother very much and would do anything for him. His dream is to be an astronaut.
ADDITIONAL NOTES: has Aspberger's*. Quincy's brother

*Asperger's and Autism are actually considered the same diagnosis now, but originally when I created Quentin he had Aspberger's, so it doesn't matter either way. The point is that he's neurodivergent and also very good and pure