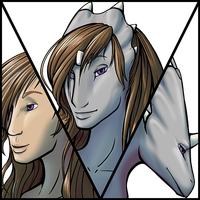 Talon Iskan is the sole daughter of Tlakanok,  and the only half-breed of the Unit. Entering the unit when she was 14,  it made her the least experienced of the group and the most connected to the outside world.

(explanation about her scar can be found here: https://armaina.dreamwidth.org/750172.html )

As a human she is 5'11" (181cm) with pale skin, brown hair and something close to Indigo or royal purple eyes, that can often be mistaken for a deep blue at a glance. Due to her preference for speed and agility, her build is similar to a seasoned gymnast and broad-shouldered.

In her Jal-Kar her height is at 6'6" (198cm) and in this form she maintains her hair and much of her human face shape with a subtle sloped muzzle, though bares the smaller version of her Ertakar form's 6 pointed head crest and center horn. Her coloration maintains that of her Ertakar's form, though her hide is not as thick or protective.

As an Ertakar she tops off at 7'3" (221 cm), still considered a runt for her species, with grey, thick hide that bares an almost silverish sheen. Her back, along with the tops of her limbs have a faded, darker gray, that fades in thin, almost brindle-like striping into her primary silverish color. A 6 horned head crest and a center horn is prominent on her head, in place of any hair.

No matter what form she takes she always maintains the same weight, somewhere around the ballpark of 350-400lbs

In her youth, her naivety of the working world leaves her more hopeful for a better outcome. This naivety also finds itself the cause of conflict both with teammates, as well as civilians, particularly Jal-Kar.

It is also this naivety that allows her to hold onto a strong sense of justice and right doing for a long time, giving her more empathy than the rest of her detached or jaded teammates. In addition to her strong morality, she keeps a very strict sense of duty, moreso to individuals than to any one species or her home. It's this sense of duty that keeps her focused, but it's also what causes her to detach from many forms of personal connection.

Her military training, combined with the defensive maneuvers taught to her by her mother, has made her skilled in physical combat. When in her typical mental state, her fighting style is more about quickness and misdirection, more defensive than offensive. When injured or berserking, her style becomes more direct and offensive, often even quicker than her preferred methods.

The phrase 'married to the job' fits well for her, most of her time spent in matters regarding her work as a Soldier.

Hobbies include painting and decorative knot work, both for personal expression as well as a focusing or calming technique. Sewing is also a trade she spends a non-trivial amount of time in, both for personal expression and out of necessity as her unique forms and shifting leave her little options for attire, forcing her to have to make or modify her own clothes to fit her needs.

In addition to her creative hobbies, she has a near obsession with information collecting. She collects and keeps hundreds of historical and research related documents, and especially seeks and prizes unique and rare information. In her spare time she reads, catalogs and sorts all this information in a manner she finds could potentially be the most useful for easy access in the future.

Talon Iskan was born to Tlakanok, an old war veteran hiding away from a post-war order that would have had her Executed. Her father was unknown, a temporary engagement made by her mother that she had no intention of perusing further than that, leaving her mother to be her sole, willful caretaker.

Growing up her mother taught her of Ertakar culture and history while living in a primarily Human city on Sytous. At many times, the contradictory teachings of what her mother told her and what was taught in the Human-centric schools, caused conflicts with teachers and classmates, until she learned to feel out an argument before creating one.

After her mother's living had been discovered, a then growing group of insurgents sought her out both as an example and to expose what had been kept a secret after the war. After the successful assassination, Talon joined the military both due to her genetic lineage, which had been kept a secret, and having no extended family to go to.

At the age of 14, she was enlisted in the military, working in a team of others that share similar lineage as her. Currently working, unsuccessfully, to prevent a second war.