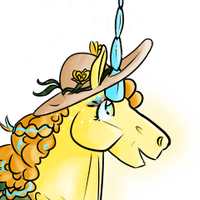 Origin of name: "Difèrne" is a stylized anagram of the word "friend"

Difèrne hails from the Mountain region. She's extremely upbeat and an unending optimist. Di travels the world in order to learn more about it and its many cultures, traditions, magic, flora, but most importantly to meet as many people and make friends.

She is very empathetic and emotional, but is suprisingly stoic on the outside. She prefers to only bring joy around her, so this is the only emotion she openly displays. She's very enthusiastic about gaining her first magic, as she wasn't born with any.