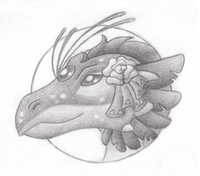 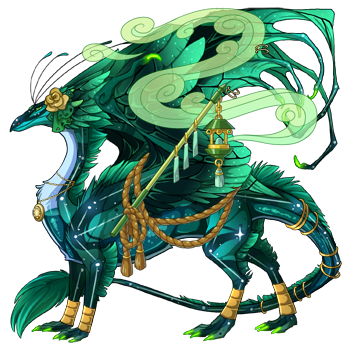 Painter originally left her birth clan in order to become a wandering artist. (That's also when she switched her birth name to her current one.) She enjoyed the lifestyle for several years and had her fair share of adventures, including finding a lost egg and taking it with her, until she finally ended up coming to the Seafoam Clan. Her egg was just about to hatch so she decided to take shelter within the clan for a little while. In the end the stay gradually turned into a permanent one when she and Horan fell in love and decided to raise the hatchling, named Beasa, together.

In the remote and fairly primitive Seafoam Clan there wasn't that much work for a visual artist, so even though she still paints and crafts for fun and occasional clients, she also uses her Nature magic to maintain a small garden for the clan. There she grows medicinal herbs, alchemy ingredients, plants used for dye-making and such. She's also teaching the future dye-maker Emini all she knows about plant-based pigments.