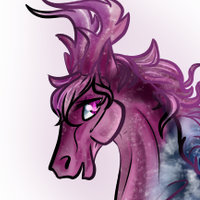 Takes jousting a little too seriously and can become very competitive, uses his magic sparringly and prefers to rely on his regional transformation for battle. Is eager to befriend stranger and to learn from them

Origin of name: "Baroque" is an art movement set in the 16thCentury characterized by its boldness (in lighting and dynamisn in visual arts for example).

Baroque was born to Noxaeterna. His father being an adventurer at heart, the two set off to explore the world together when he was still just a young foal.

Baroque is quiet to the point of being mistaken as mute. When he does speak, he is soft-spoken and concise. This comes as a surprise given his name, however, but the disparity ends here. Baroque is bold and adventurous like his father, to the point of being reckless. As a young colt, Rock is highly dependent on his father to teach him the ways of the world. Because he is used to only being around his father, Baroque is a bit awkward around other quirlies. That doesn't stop him from being a bit pushy, though.

Baroque is fascinated by magic, and while he is perfectly content with his own magics, he can become envious of others for their powers and skills, especially when he feels as though the quirlicorns in question aren't deserving of such magic.