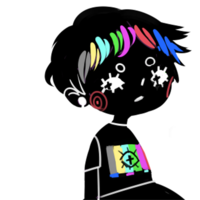 Radio broadcasting began back in 1920, the public was overcome by radio craze after the initial broadcast. The demand for receivers increased, and so did the number of radio stations. Among the receivers to be made, there was a genie created in the midst of one. Radio was his name, he was summoned upon every time his receiver turned on. Being a genie, he would grant the owner three wishes. After those wishes were gone, so was he. Radio would then be traded, transferred, or sold to others.

As radios evolved throughout the years, so did Radio's "home", style, and speech. He would adapt to his new environment! Around the 1950s radios became carriable, thus making Radio more prone to meeting others. During the 1970-1980s, radios got bigger and louder, this was Radio's peak. Meeting lovers, being apart of bigger things, and realizing the freedom he was missing out on.

Radio craved the freedom his owners would have, driving around with music blasting, wind in their hair, laughing. He wanted that too. His lover at the time, came up with a plan! She would wish for Radio to have a human form, and being able to leave his "home" whenever he felt like it. If she were to use her last wish, Radio would be forced back into his home. Having to move on and meet someone else. Because of this, she didn't use it. Radio and his lover continued to live their lives, making amazing memories along the way. This relationship would soon fall downhill, resulting in physical and emotional abuse to each of the parties. In a heated argument, his lover made her final wish, without meaning to. She wished he would NEVER find happiness. With that, Radio was trapped again. For years, Radio didn't meet anyone. He finally, was alone and broken down.

Amidst the trash heaps, a young man found the broken radio. He would then take it home, to repair, not realizing he was saving Radio's life. Once the young man completed, and turned it on, out popped Radio. Radio, not having seen a human in so long, stayed in a state of shock. Both the young man and Radio stared at each other, for what felt like an eternity. The man broke the silence, with a genuine smile and with his calming voice, spoke. "Nice to meet you."

Years of helping Radio start up his life caused Dent to have a strong bond with Radio. Dent gave Radio the nickname "Ray", and only refers to Radio as such! Dent of coursed wished for Radio to be free. Never to be forced into anything he doesn't want to do again. Ray, although very cheeky with Dent, is eternally grateful. Ray would give up just about anything for his friend.