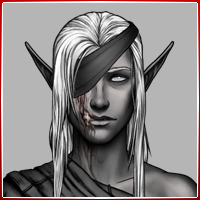 Circle of the Dark Pact Druid

Appearance:
Valkyn is 6'4, and would cut a firm and intimidating figure if not for the touch of malnutrition that has deteriorated his form slightly. He has dark grey skin, colorless white hair, and eyes that were once a sort of lilac, but are now clouded over to a milky white film. Or, at his, his one remaining eye is. His right eye (viewer's left) is missing, creating a hole in his face where a black ichor perpetually oozes from. Over the centuries he has endured this, the mildly caustic substance has carved ruts down his face when it runs, leaving the right side of his face a disfigured mess of burn-like scar tissue, including a cleft that's been melted out of his upper and lower lip on that side, resulting in a permanent snarl of exposed fangs. His teeth are all pointed, but jagged and chaotic, more resembling shards of broken glass in their lengths and shapes than something anatomically coherent. To mitigate the continued damage to his face, Valkyn wears a nondescript strip of dark leather in a band around his head, acting as an eyepatch that serves to contain the mess.

He has been living in an underground cavern, a long chain bound to his right ankle, for centuries. He has enough "leash" to move around and fend for himself, growing edible plant life in the space, drinking from a stream that flows through the cave, and hunting animals that wander in, but at this point he's more feral than he is a person. As such, he is almost always only wearing a ratty pair of (also nondescript) trousers, with his torso unclothed, except in cold weather. He has no footwear or other adornments, though his body is covered in a myriad of strange scars.

Personality:
As mentioned, Valkyn is more feral than socialized these days, almost never encountering other people in his life. He's very hard to converse with, as he contributes very little to the conversation, not even fully fluent in common. He has no social poise or apparent know-how anymore, his motivations and interactions a bit more primitive. But, though he can use his warped magic to wildshape into not animals but all manner of horrid aberrations, making him a terrifying opponent if aggressed upon--when he has no need to hunt or defend himself, he is a very low-energy, even-tempered creature with infinite patience and seemingly very little emotion.