Bran is a nature-lover who prefers to spend his time alone in the wilderness when he can. He likes to immerse himself in his hobbies and faith, finding little time for social situations. Bran has a deep respect for the cycle of life and enjoys collecting skulls and bones that he finds, often creating small shrines or crafts with them. He has very strong spiritual beliefs and his path is a mix of Shinto, Druidry and Paganism.

Suffering from social anxiety, he finds that other people often make him anxious, irritated and eager to get away. His anxiety sometimes makes him seem distant and cold to others. However at heart, he just wants to help people and is a loving and compassionate soul. Bran enjoys helping and guiding others through spiritual guidance and practical advice.

Bran has a few people who he feels incredibly protective over and would do anything for. He rarely shows aggression but will be quick to snarl if he feels someone he loves is in danger. 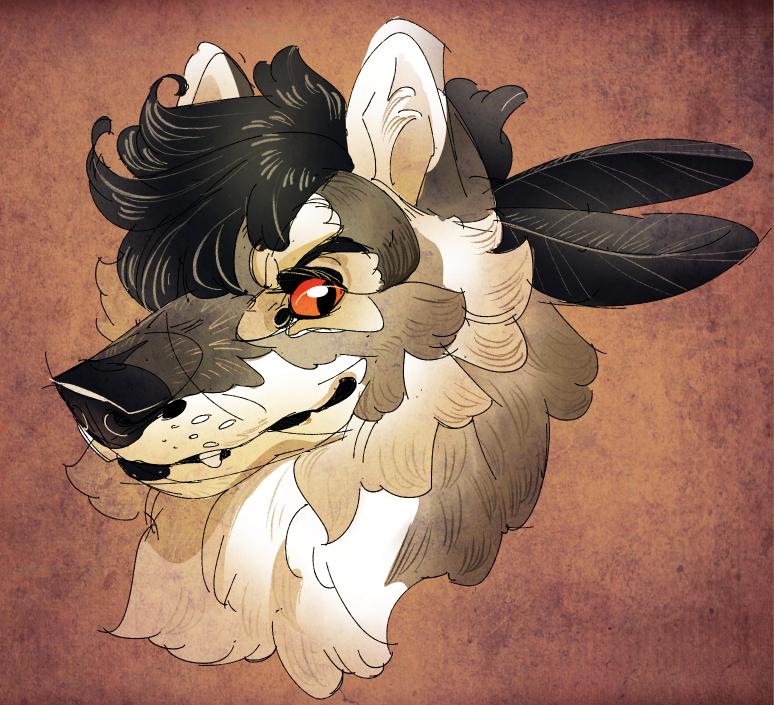 Bran's primary form is that of a stocky grey wolf with raven feathers protruding from his neck and tail fur. He is sometimes portrayed with black crow/raven wings. His eyes are a piercing red and his has larger than average upper canine teeth which hang down over his lip. Bran's fur is made up of various shades of greys. He always wears a blood-red magatama jewel around his neck. This jewel contains part of his soul and is the fuel for his transformations.

Bran is a devote Shinto worshiper and his patron kami is the agricultural god Inari-Okami. As well as being a follower of Shinto, Bran is also Pagan and has recently come into contact with the god Loki.

Bran is an individual of many forms. These forms originally stemmed from myself drawing him in different ways but they have all ended up as facets of his personality.

These are as follows (please refer to the images for reference):