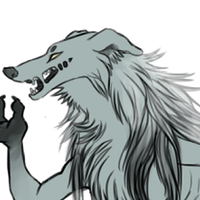 Species: Eldritch abomination (likens her form to an anthropomorphic borzoi, but is a mass of malleable black substance)
Age: Infinite
Height : 140 feet (typical size; can appear larger or smaller to onlookers)

A being from before times lost who inhabits the deepest depths of the oceans adjacent to Akila. Kera is the manifestation of mortal apathy, depression, nihilism and loss of faith. It is because of her influence that mortals experience negative emotions, and proximity to her only intensify them. Being hundreds of miles away can thrust a whole civilization into a state of lethargy and torpor; any closer, and her very presence can induce madness.

Being an elder god--and indeed, the only one--Kera's power is beyond reckoning, though she will rarely put it to use. She may commune using psychic interference, appear through imagery, manifest in dreams; any attempt to destroy her has been in vain, and none were ever recorded. Indeed, the end of civilization is well within her reach; it is merely her neutrality toward the world around her that stops her from doing so.

Kera does not antagonize mankind, and she rarely, if ever, communicates at all in any way. However, she does reach out every few generations to a sole individual, using their mind as a means to an end--just what that end is, however, is unclear, as are her nebulous motives. One survivor's tale tells of how she devoured the light of the stars and moon, leaving only a blanket of midnight to coat the sky while her eyes radiated with milky starlight. Indeed, perhaps this hunk of rock that serves as her prison means less to her than the utter subsumption of the cosmos.