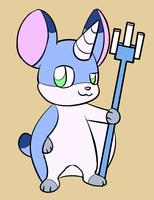 Rocket is a Skycecorn (which is a kind of Cricecorn) and they use firework rockets in order to achieve actual flight as opposed to just the gliding their species is normally known for. They also own a Minecraft trident, which is enchanted with both Loyalty and Riptide apparently, allowing it to come back after they throw it at things (which they do a lot of because it's amusing) but also use it to take off from water or fly around when it's raining. They are mischievous and smug, and have a bit of an ego (especially regarding how fast they can fly) but are still nice to others. Rocket is very bold and daring and will do a lot of stuff to show they aren't scared.

Created as a collab between Diddgery and I!