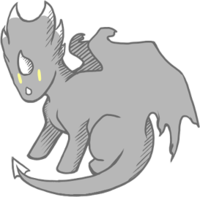 Dione has been seen in many forms, but is most commonly seen in 3. The first, most common form, is a Dragon. A very large silver dragon, with yellow eyes and a somewhat Styracosaurus-like crest. Her build is that of a typical western dragon, though with a lithe, cat-like structure. Sharp spines follow down her spine to the end of her tail, which is adorned with a boney spade edged with tiny barbs.

As a human she has a tan complexion, light hair mostly white and somewhat silvery, and still keeps her yellow eyes. She has a tall, slender build and dresses very elegantly, nothing frilly or overly complicated. In either form she always seems to carry a sense of calm about her in her expression.

Silhouette form is the most ethereal, humanoid looking, digitigrade, lithe and glowing silver. She bares a large mask headdress of sorts, that matches the shape and points of her dragon form. She only wears sheer drapery, more for appearance than covering.

Docile by nature, but by no means a pushover. She is calm and collected, rarely angered or agitated in any way and manages to keep her cool even when she does become angered. Protective and motherly, she treats friends as though they were her own brood.