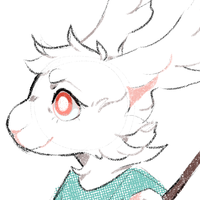 When Blanca was born, the most striking thing about her was her snow white fur, a stark contrast to her parents' reddish coats. She was born albino, and this affected not only her fur colour, but also her sight, as all she's able to see is changes in light level. Despite this, she is absolutely not someone needing pity, as she has never had sight and therefore doesn't miss it. She's memorised the various bridges and platforms that make up her hometown, and can traverse them just about as quickly as a well-sighted person. She also carries a stick with her whenever she's out, just in case.

Anyone who meets Blanca on her home turf would barely think there was anything wrong at all, as she's a very confident, friendly individual with a knack for telling emotion by the tone in someone's voice rather than their expressions. Outside of Aldea de Secuoya she may stumble and go at a much slower pace, tapping the ground ahead with her stick, but she's still intelligent and a good problem solver.

Where her sight faltered, her other senses kicked in stronger, and as such she's very sensitive to both sound and texture, which is a blessing and a curse. It allows her to figure out where people are in front of her, and to tell what the ingredients in her pantry are without the need of visual cues, relying on their scent and texture. But it also makes her very picky about her clothing, as she's very adverse to rough textures, and means she can get overwhelmed in busy situations. Thankfully that last part is not an issue in Aldea de Secuoya, as it is a rather small, quiet settlement. She's also rather sensitive to sunlight, as her pale skin burns easily, and as such she spends the vast majority of her time under the protective shade of the forest canopy.

A strong passion of hers is potion-making, mostly concentrated on recipes that help with healing and soothing of symptoms. She collects as many ingredients as she can, both from her forest home and from far away, usually brought to her by more adventurous friends, and uses them in her experiments. She hasn't got much access to reading materials, as she has to ask others to read recipes out for her, but she's a fast learner. She's become quite a skilled apothecarist, making a little money on the side selling her more successful mixtures to passing travellers.