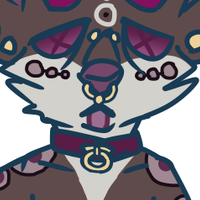 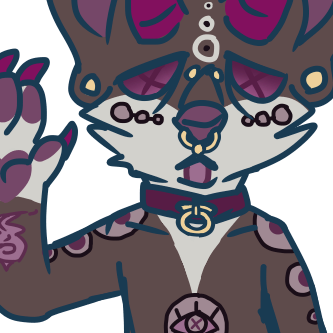 grindel is a cool hellhound witch. sometimes i draw him as a human cause i cant do animals.

grindel lives in the middle of a forest in alabama. there is no one for miles, which is how he likes it. once a week he goes to town for various shopping reasons (mostly potions and requirements for witching). for the most part, he keeps to himself in the shack. it is a single story wooden building with one bedroom, one bathroom, a kitchen, and small living room. there is no basement, so he keeps junk in a shed outside. grindel has lived his whole life in alabama, though there have been opportunities for travel. he likes the weather. his occupation is unknown, but it is suspected he will hex someone for a decent amount of cash.

he has two close friends: effie and andrea. he and andrea had been friends since elementary school, though there was a period where they were separated due to her going off to college. she now works as a graphic designed. effie and grindel met at her potions shop, which he frequented. they bonded quickly over their shared interest in magic (effie prefers to use hers to help and heal). they seem to be opposites, but get along well. grindel ended up introducing effie to andrea, ending in them becoming a couple as well. grindel and effie have been dating for 3 years.

"I have seen what the darkness does. Say goodbye to who I was."

grindel is a practicing witch with a deep appreciation for nature. he dislikes other people, however. because of this he spends most of his time in his shack in the depths of the forest. he enjoys being alone with his thoughts and is quick to turn down offers for socialization. grindel has a sharp tongue. no one is safe from his biting hexes. he has a few close friends and does enjoy spending time with them upon occasion (thought he prefers if they visit him). he is a bit elitist in that he finds witches to be better than the average human.

as a hellhound, grindel's fur is purple-gray-brown with lighter cream-like markings on the stomach, chest, paws, muzzle & cheeks, and legs. his tail is thin, with light purple and cream stripes towards the center/end. the tip is shaped like a spade and is darker purple. in the center of his chest is an eye pattern in light purple, lined in dark purple. he has three stripes on each leg: dark purple, light, dark. his shoulders and upper arms have three circle designs. on his right wrist is a flame. he has rather large ears, the tips being light purple. they are also pierced. he has three light purple circles under each eye, outlines by dark purple. on his chin are three stripes: dark purple, light, dark. on his forehead are three white circles with dark purple centers. his nose is purple (and pierced, so is the bridge). his fur is rather short. he wears a dark purple collar with a golden ring usually. his eyes are dark purple with X shaped pupils. grindel's paw pads are purple and his nails are as well. his body has a standard hellhound build: narrow shoulders and wide hips.

as a human, grindel has pale skin with silver hair (natural). he has bangs and his hair covers his ears; it is slightly longer in the back. he has a thin, feminine build. grindel has his septum and bridge pierced, as well as his ears. his eyes are a bright purple. for tattoos, he has very similar ones to the fur patterns on his hellhound design. one is on his right wrist (flame), three target-like circles on each should/upper arm, three stripes under his chin, three circles under each eye, and three stripes on each ankle. his style of clothing is a modern occult look, often incorporating elements of witchiness. he enjoys crop tops and high waist jeans. it is not uncommon to see him in dresses either. much of his clothing is dark (black, blue, purple, gray). he also enjoys wearing quite a bit of accessories (mainly collars/chokers and necklaces, but braclelets can work too). he likes sleeveless shirts cause they show off his snazzy tattoos.

Effie Grindel's girlfriend/soulmate. They met at her potion shop, where they quickly learned they had a shared interest in magic.

Andrea Effie's other girlfriend and Grindel's bff. She and Grindel have been friends for years (he introduced effie & andrea).