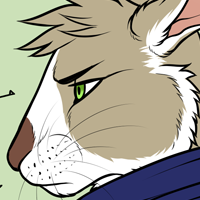 Jan is a tall and stoic Belgian hare rabbit. He has a lightly toned form with muscular legs and, long pointed ears and a slender face. Despite his breed name, Jan is a domestic rabbit and not a wild hare.

His colouration consists of a light mousy brown over pure white fur, with a reddish brown on his nose, tail, hands and feet. Like all rabbits Jan has no visible paw pads. He has slightly longer fluffy fur on top of his head that he open gels to stick up slightly. His eyes are a vivid forest green.

Jan often wears cotton scarves and fitted coats. His dress sense is rather fashionable and he enjoys making himself look presentable. It is very rare that he will be seen in casual clothes such as t-shirts, though he may make an exception if he is doing physical work.

Jan likes to keep himself to himself and can come across as rude to others. He very much suffers from 'resting bitch face' and can appear intimidating even when he's trying not to be. Those who get to know Jan soon find out that he is soft at heart and has a great love for cute things, flowers and cuddling up on a cold night.

Being an introvert, Jan also struggles with anxiety and often struggles with meeting other people. He has found that tidying up and organizing help curb his anxiety, his recent favourite stress activity being making detailed lists.

Jan has an intense love for gardening and spends much of his time around plants, including his job where he works as a self-employed florist.

Jan also has a strong appreciation for art and poetry and enjoys visiting museums whenever he can. He also enjoys researching history and visiting national monuments.

Jan is often seen smoking a pipe and enjoys both tobacco and cannabis smoking.

Thomas: [Jan's boyfriend] Jan met Thomas whilst he was on a night out with Søren. After a bit of awkward flirting and planning never to see the fox again, Jan found himself thinking about him constantly. A few texts and dates later and the two started dating. Jan isn't sure if Søren is jealous of his relationship, but he does act it sometimes.

Søren: [Jan's best friend] Jan rented a room out in his house to save some money and Søren was the one who answered. Søren was everything Jan didn't like - loud, binge drinker, partier and just generally a nuisance most the time. Over time however Jan became fond of the dog and they started to go out together, Søren claiming that it would 'loosen Jan up' a little. Whatever he did it must of worked as the two have been best friends for over ten years now.

Jakob: [Close friend] Jan met Jakob as a customer in his shop and found out that they shared many common interests particularly regarding plants and plant care. The two soon became friends and now spend many a weekend smoking and gardening in either of their gardens.