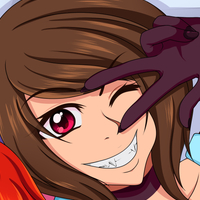 After running into Kaiser's life, and literally head first and into his car, the alien has done all he can to support Maike T. Lusine through her troubled home-life and thus she ended up a part of Sugar Star. She's teased for her mediocre magic ability and her "failure" in all fields of flirting and seduction that succubi are infamous for yet she daydreams about the day where she'll find love and be formidable in magic. However she seems to have hidden potential that shows itself at times along with a more angry, revenge-thirsty side to herself

Baking
Knows how to make and prepare baked products, good memory of the methods, times and measurements needed to make them.

Fire-based magic
Has speciality in fire based magic, creating and manipulation of fire

Magic
Can use and channel magic, capable of using strong and powerful spells

Makes others laugh
Has a natural sense of humour that appeals to others. Has an appealing way in how she tells her jokes and she sees humour in every day things and has quick wit and able to think on her feet

Freethinking
Can reject accepted opinions and beliefs, stands up for her own thoughts

Playful
Loves games and having fun with others, able to get others into a happy mood

Relaxed
Almost never gets tense or anxious, gives a calming presence for others

Audacious
Recklessly bold and disobedient to rules and laws

Hedonistic
Follows her desires for pleasure, sexual and hunger mainly

Lazy
Doesn’t like to work, will slack off often

Sarcastic
Jumps to sarcasm at others she doesn’t like