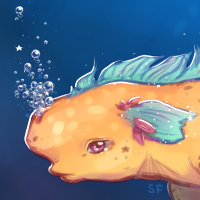 A beast, older than time, living in the depths of the sea; waiting to be released from its long-lasting bond and sorrow.

Eons ago, Heimeran witnessed mankind appearing on earth, and unlike any animal living in the sea these creatures had rich minds which made it remarkably enjoyable to delve into. Heimeran, experiencing the wealth of ideas from other life forms than itself for the first time, would follow their boats and hark to their traditions, tales and gossip for days uninterrupted, blossoming to new life. It could not get enough hearing about their culture, good and bad occurences they experienced and everyday thoughts; and one day, Heimeram experienced a new, growing feeling: Desire.

How joyous would it be to stroll ashore. Living in a house, sitting at a table, eating from a dish. Sleeping in a bed. Heading to the market, stopping by for a chat with the neighbour. Thoughts. Words. Exchange. Interaction.

One night, Heimeram caught sight of a shooting star. It had heard of a human's myth that shooting stars fulfill wishes so it closed its eyes and adressed its plea to the falling star: "Please, make me human!"

When Heimeram opened its eyes again, the Lord of the Stars appeared in front of it with extended arms.

"I will satisfy your wish but know my services are not free of charge."

"Oh, what do you want from me?", Heimeram asked in an uncertain tone. "I do not own any possessions I could give in return."

"Do not worry, beast of the sea." The Lord of the Stars gazed at Heimeram with an astute smile. "See, you watched that star fall down from the sky. That is a star that is lost to me; it was destroyed by henchmen of the Mistress of the Sun. She tries to weaken my power to take over my realm. I want you to help my star seedlings grow. You don't need to do anything even, I just need you to be at my disposal as a host for them."

"No, it does not. But I need you to do it in your current form because the weak human body cannot bear the strain. Their life will dwindle away in no time."

"And when do I become human?"

"As soon as the first human begins to miss and wishes to see you."

Overconfidently, Heimeram snorted through its blowhole. "That requirement will be met in only a little while! We are friends, of course they are going to miss me! I agree to the pact!"

"I don't think you know the true meaning of that word", the Lord of the Stars said derisively. Before Heimeram could grasp the bearing of his remark, the Lord disappeared.