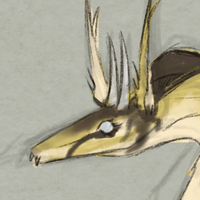 info is mess. who knows when and will I make it cleaner lol

- hybrid being with long, slender body and pair of short wings, useless for flight. if she would be part of species, wings would disappear in evolution
- most of body is covered in smooth, small, round scales
- soft, silky, long fur, covering chest and shoulder area, slightly on spine, and on back of hind legs, continuing on underside of tail and covering one third of tail, and after than last third of tail with longest fur. fur has bit of silvering
- covered in rosettes and small spots, with rosettes having silver inside them; similair in shape to those of margay
- dorsal semi-transparent fin
- darker spots on upper side of body, broken by bright dorsal stripe

- body - eel/snake like, with eel-like fins, and cobra hood, similair to that of monocle cobra
- head - ? appears to be most of canine, togheter with ears. oribi like, smooth, gently curved horns. she has two viper fangs, while rest of teeth seem to resemble those of canine. lower fangs are thin and viper-like, but they aren’t hollow as upper fangs
- feline front legs, owl/parrot hind legs; retrcactable claws on front legsŽ
- wings - arctic tern, with colouration similair to one of barn owl, smooth long feathers

- she changes thru seasons - her main colour togheter with spots

- her main yellow fades when she gets sick, tho her spots and stripes don’t change then

- setting - modern with influence of old?
- mixed heritage - in line of ancient Egypt and old Slavic
- not interested in relatiships, be it friendship or parnership - she would be classified as asexual aromantic, tho she herself hardly pays any thought to any sort of labeling (except her heritage maybe)
- pagan (slavic-egyptian), however not really religious - believes and respects, doesn’t interact in religious way except from mayor holydays

- wears mostly black, with silver and pale gold accents, sometimes copper
- plain clothing with lot of jewerly - will have several rings, bracelets and neckleace at once, with long heavy ornamental earrings; will wear hip chains, leg bracelets etc. most of her jewerly isn’t precious metals, rather immitations
- almpost always seen in highheels, to the point it is though that she sleeps in those
- will randomly carry khopesh

- plays (croatian?) gusle and egyptian harph
- skilled in writting glagoljica and hieroglyphs; will requently use those in her notes, cookbook etc. could write other scripts, out of fun
- curses in other languages, even if she doesn’t know them fully (esp slavic ones)
- collects tapestries, embroideries, goblens, figurines of clay and wood; she herself will make such, she enjoys any craft that requires time and detailing
- skilled in fighting with khopesh - she has few khopeshs and other swords, some more of decorative than practical use
- keeps banana slugs and banana eels as pets (togheter with chickens and turkeys)
- into anything elegant, decorative

- half of her diet is seafood, where more than half of it is sushi - she in general is better with raw fish (or any other raw food, be it meat or vegetable/fruit). she enjoys fruits a lot, mostly banana, mango and kiwi
- will drink mostly fruity, sweet alcohol

- has insecurities about her seasonal change, and over about anything changing on and around her