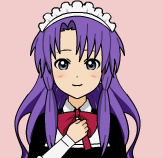 Tourmaline was raised in Maple Manor after adoption by Bill (her life previous to adoption is lost to time). She was rarely exposed to the world outside, only ever leaving to do odd jobs for those that lived in the manor, and took an official position as maid as soon as she was ever able.

With only the goings-on of the manor to occupy her, Tourmaline filled her downtime every day with a wandering mind, inserting the people around her into wacky, fantastical stories not too far off from the situations they'd once be in. As she grew older, she took up a hobby of illustrating those scenes into personal graphic novel collections, which almost always took a turn for the interesting.

As adulthood dawned upon her, Tourmaline's object of affection swayed from Bill (in a fatherly sense) to Ignis (in a more fascinated sense). Not knowing any other way to display her interest, she simply performed Ignis's requests diligently, as she'd always done, even into the time of her life when adulthood took hold.