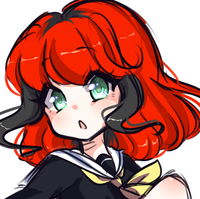 Poppy-chan initially was a character I used specifically to vent, as I didn't want to "stain" my other characters.
Poppy-chan wants to be the cutest to everyone's eyes, especially to her crush, and wouldn't hesitate to get rid of whoever is on the way.  Since she's not particularly strong and knows it, she tends to destroy people more mentally than physically.
Poppy-chan's character was actually created with the idea of a humanized poppy, both on her appearance and personality. The poppy is a colorful flower (which goes with her cute, cheering and smiling personality) but with really dark "racines" (like her yandere side, dark thoughts as well as the dark racines in her red hair). It's also pretty delicate as a flower and fades easily when it's plucked (might be meaning her interest fades easily once she gets what she wants, but who knows).