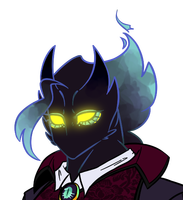 Race: Unknown
Magnus's entire body is made up of shadows. Because of such, he cannot feel much, neither can he eat or sleep.

Mannerisms
- Fiddles with their outfit, adjusting the collar when he's nervous
- Brushes back his 'hair' when he's anxious
- Shadow's flaring up are a sign of both fright and aggression
- Shadowy parts of his body dripping are a sign of depression / sadness

Dislikes: The dark, the sun, the silence

Towards strangers they're quite shy and won't say much, preferring to loom nearby and watch them. Though that isn't to say they won't lend a hand to help should the call out for it. He's a lot more selfless than he gives himself credit for.

Towards friends he can be quite the conversationalist. Offering aid and lending an ear, er- someone to talk to. They will do what they can to help, and protect them to a certain degree.

Towards crushes they may come off a bit clingy. Offering them tokens of their appreciation, gifts, songs, whatever they want, he will make it so. Lovers will find themselves never alone, for they will become quite protective to a primal degree.

Towards enemies they will attempt to talk things through, but should conflict be the only outcome, he will do all he can to minimalize damage output to those around him in favor of putting himself in danger. He's not one to go for the kill unless his emotions get tangled into the mix, then it's game over for the attacker.

Description: Can control the shadows around them, allowing them to;
- Shapeshift into small, big, or different shapes.
- Teleport short distances between connected shadows.
- Create shadowy tendrils to attack or defend.

Weakness: Strong emotions cause them to lose control, as well as too much light weakening their powers.

Description: Is capable of slipping into the shadow of another person and hiding within it.

Weakness: Shine a light at him and he'll be forced to abandon his position.

Weaknesses: Weak to direct light exposure. Also if the brooch on his chest takes damage, so will he. For it is the only thing keeping him together.

Favorite Food: Can't eat, but enjoys the sight of well put together dishes.

Favorite Possession: A diary and his Violin

Magnus was once a man who had it all, a large estate, wealthy family, and a thriving business.

The only thing he seemed to be missing was a beloved to remain forever by his side.

She came from what appeared to be a noble family, which was all his family needed to pair her with him in hopes of continuing the golden era that which their family had been blessed by thus far. Unfortunately for Magnus however, Silvia had other plans. She spoke with Magnus and told him she wanted to elope and make a life for themselves elsewhere. Him liking the idea of something so new and outlandish, it was enough to get him on board.

However it was never meant to be.

Having lured him into the woods, into an abandoned house, she cursed him to become a monster of the dark and bound him to the shadows of the floor boards. Unable to escape and left to rot in heartbreak and madness until the day someone come find him.

Silvia had been a witch seeking to play out her revenge against his family, as the good fortune hadn't been crafted from decades of hard labor apparently.

And throughout the years, his family name had succumbed to disaster, one after another. Until the entirety of their lineage had been lost. All the while Magnus festered where he was forced to reside.

Hoping one day, that someone would come and free him.

Brooch: The brooch he wears happens to be the very one that was used to curse him, a gift given to him by Silvia. He cannot take it off. But perhaps someone else might?