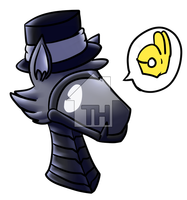 SynCores were creatures invented by a militaristic race known as the Xesenir, who wanted scouts that were clever, flexible and durable. They granted this robotic species AI, and a strong curiosity in order to propel their search for vital information. However, what the Xenesir did not expect was that equipping their "drones" with such characteristics would cause their AI to evolve quickly. After several decades SynCores grew bored of all their testing and containment and together they plotted to escape. While a shipment of them were being transferred to a base on another planet, some managed to slip free of their containment. They hijacked the ship and set the course for somewhere new and exciting, being sure to drop off whatever remaining Xesenir that were on the ship. It has been a few decades since this has occurred, but they say there is still a SynCore piloting the stolen freighter as them and their crew sail their wanderlust from one place to the next.

As animated as can be, this jaunty SynCore tickles a fiddle while dancing a little jig. You begin to tap your foot and suddenly you've been swept into a dance by this monochromatic robot.
There's no doubt they've been looking for a dancing partner all this time. Care to jive with this critter?