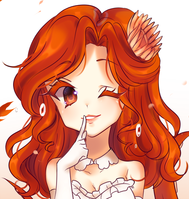 Patrika is an octopus living in the depth of the Sea.
Not much is known about Patrika, but she seemed to be about to marry someone when Suisei fell into the sea. It is implied that she has other "partners" she is married to, but polygamy doesn't seem to be a problem underwater.
Mature and caring, Patrika fills that "mother/big sister figure" for the others sea creatures. She often relativizes in cases of trouble, but can appear particularly dangerous and intimidating in extreme cases, mostly when her beloveds are in danger.