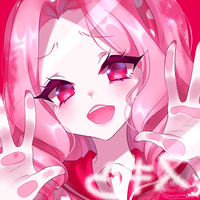 Bloody Mary Sue is an original character created by a hikikomori, who gave her the most "perfect traits" she could have gotten according to his tastes (making her a Mary Sue), to claim her as his "waifu".
The character being in love with her creator (and fortunately for her, it was mutual), we could say they were in a "romantic relationship". As time passed, however, the man decided to improve as a person and change his lifestyle by going outside and starting to have a more social life. He eventually fell for a "real" girl and ended up dating her, initially hiding this from Bloody Mary Sue. The character living inside the creator's computer, he started considering getting rid of her and definitely stopped using the computer, shutting Bloody Mary Sue down and avoiding any kind of contact with her. Realizing what was going on, Bloody Mary Sue was heartbroken and completely blinded with denial, sorrow, jealousy and rage. The day her former lover brought his new girlfriend at home, she decided to murder the couple by electrocution (she somehow succeeded in trafficking electric cables or whatever, idk man). Nobody knows what happened to her after this.
To describe this character, Bloody Mary Sue is a mix of Mary Sue characters and yandere ones. Except that even in this fiction, she's not real.

OC FACT: She got chosen (through voting) to be the 2018 Valentines OC, and got a special design and illustration thanks to this.