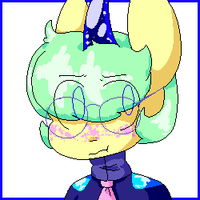 The 'enforcer' of Pyatiugolnik's rules, glaring down at the Mags' resident dictators with crossed arms. Kolo alone stands as the roadblock between the egomaniacs and total world domination, and has done so for years, his cold exterior and lack of earthly connections integral to his position. Or, so he says.

In reality, Kolo is a shy, withdrawn nerd who writes self-insert fiction of himself and the other Mags, spending his free time adding more to his pantheon of stories. His acrid persona is half-built from childhood trauma and from his crushing responsibility complex, his only defense against his fear that the world will fall apart if he doesn't pour himself into fixing it.

But, time mends even the deepest wounds, and Kolo has slowly opened up to the others, sharing what happened to him at the hands of Bereave and emotionally connecting to his peers. Such change was jump-started by his budding relationship with Dijamant, his longtime crush and once the greatest source of his fear.

Though overcoming his personality disorder seems insurmountable, for once in his life, he feels safe enough to try.

“I'm gonna come back and things will be different-”