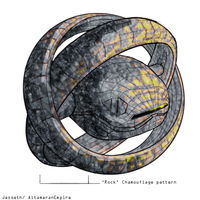 Not in an AI way

It's two toridals were constructed specifically for what would be misnamed the Hummas mission - had Humans been deemed an acceptable risk for contact, they would have been detatched to form part of an Ambasadorial space station.

At it's center is a Short Jump Drive; "Short" meaning it's can't reach a faster-than-light speed that won't degrade to sub light speed. An optimal jump is about 2.5 light years, according to human reconing.