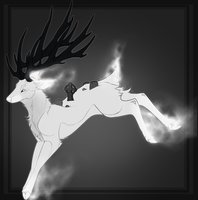 He doesn't really talk much  he mostly just nods or shakes he's head if he really needs to talk he will . He takes his job very seriously .

Kyran has not alway's been part of the soul collector herd he was once king of the deer Proud and noble watching over the herds that resided around the area till that faithful day that a hunter was tracking him ,kyran tried to cover his tracks so this man would not fine his lovely herd but as he tried to out fox the man he made his way to the mountain he got turned around causing himself  to get stuck on a ledge  with no where to go not wanting to be kill by the man kyran decided the only thing to do was to jump off the cliff and into the river he knew that he might not survive the fall but at least his herd was safe for another day  they would also find another king to watch over them .As kyran came to he saw creatures and humans of all kinds as a rather tall teenage boy with another medium boy holding a list held onto a gate they were splitting people and creatures in to different lines as kyran got up in to one line the tall boy walked over to him ,he spoke to kyran "Hey i saw what you did back there for your family that was some jump would  you like to become one of our daring soul collectors ?"kyran thought about it before shaking his head yes ,after year and half of training a becoming a full fledge soul collector . Kyran comes out  once a year near the end of September and the  beginning of october Kyran is waken from his slumber to collect the souls of the dearly departed.Kyran is not the only Soul Collecter there are a whole herd of these ghostly beasts that collect all around the world kyran's area is  United States. For every good soul he collects and delivers to heaven he grows another antler, Damned soul(evil) they are contanted in the graves on his back  till they can be delivered to hell.