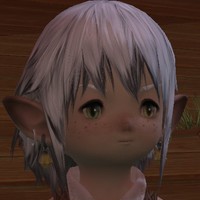 He's from a very strange family that decided to name themselves after Hyur food, specifically take-away food (for some reason). His parent's names are Margarita and Pepperoni who he called Mamarita and Paparoni. He has many brothers and sisters, who are all named after pizza toppings. He has many aunties and uncles as well, like auntie Donner Kebab, she's pretty cool. She can stab people like Vlad the Impaler.

His brother, Meat Feast was getting married and was having a stag do. Hawaiian was reluctant to go because he's not well liked in the tribe BUT HE WENT ANYWAY because otherwise Meat Feast would beat him up. Meat Feast (who sounds like Gladio from FFXV) was like 'Dude, nobody likes you because you're so negative to everything. You need to be more cool!' and he dared Hawaiian to start saying yes to everything. Hawaiian being a little shit decided to take that literally. When he was offered to become an adventurer, he said yes and got the fuck out of there. He's been winging it through the whole adventure and isn't really sure what the hell is going on but he's stubborn and has already gone this far. He's gonna show Meat Feast that he's cool.

K'hani Tia: They were assigned to work together at one point and Hawaiian has been trying to show off his skills to him, even though K'hani is actually a higher level and has all the expansion packs.

Rin Inariko Hawaiian and Rin have been buddies for a while, they like to strip down to their underwear and dance at unsuspecting strangers. Avoid them at all costs.