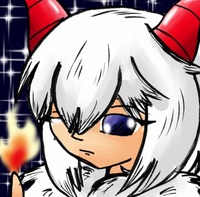 Gijinka Volcarona, based upon a Larvesta/Volcarona I caught in my "Pokemon OmegaRuby" game! :)

Personality: A watcher of things...but he'll get involved on a whim. Prefers to read books and relax most of the time. Enjoys laying out in high places, to be "closer to the sun".