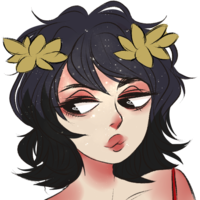 "I am emperor. It is I who know what is best for Rome. Not you traitors. Now, let go of my horses!" - Elagabalus

Aside from gang attire, Elagabalus very much enjoys dressing up in more feminine clothes and wearing makeup. He feels much more confident and comfortable when he presents this way, and it just makes him feel the best. Sometimes he's mistaken for a girl, and that tends to upset him.

Elagabalus is definitely one of the more flighty Romans- unlike the others, he doesn't have a problem with building up someone's ego constantly (which he does to Caligula often) or acting nicer to manipulate them. Elaga has a tendency to play up certain things to get what he wants. Whether it be acting too flirty or helpless, he has absolutely no regulations against faking things for any reason. However, he's also much more prone to talking back than the rest of them, and tends to mess with others, particularly Nero, a lot.

He is very effeminate, in speech, mannerisms, presentation- basically everything. It is very, very difficult for Elaga to act in a "manly" way, and if he has to, he'll undoubtedly slip up somehow. He has a fascination with romance. As with all the Romans, he often has flings and sleeps around, but he does much more than the rest, simply because he loves affection. Laga relishes in the idea of being in love and being pampered, and he's even willing to fake interest just so people treat him will. He does long for some sort of true relationship and a reciprocation of feelings, but for now, he's content with acting like a "kept boy" for Caligula- who very much does not view him that way. At all.

Even as a child, Elagabalus was extremely feminine. While his parents were okay with this for a while, allowing him to be the princess in certain games, they soon grew more upset with him. They didn't often force him to do more masculine activities, although they tried to make him play with boys more often, but they did stop him from dressing up. He was friends with two siblings, a brother and a sister, as a child, and would often get away with these proclivities by going over to their house on the excuse of playing with the boy. Instead, he'd be with the girl. As he grew up, he struggled with being unable to express himself properly. He was never ashamed, but he also felt very confined throughout his mandatory schooling to dress and act a certain way.

Elaga chose crime after high school because he saw it as preferable to a career, like a shortcut to being wealthy. He decided to join the Romans in particular because of how they were much more decadent than the other gangs, and less strict than the Royals, so he'd have a better shot at upward mobility. He also assumed they wouldn't be as discriminatory towards him- whether they were or not is a bit unclear.

∨ If Elagabalus says he's giving you a present, don't take it. It's probably bees.