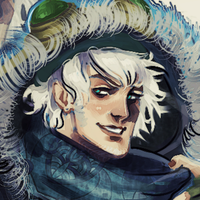 Vaulen is a traveler who wanders his world studying magic and collecting any odd, magical artifacts he can get his hands on. He is very curious and willing to take risks for the sake of discovery, which has resulted in quite the extensive knowledge of magic despite his world being fairly young. Due to his interests he is an adept magic user despite typically only using it to very small and convenient degrees, such as a spark to light a fireplace.
His traveling tendencies mean he has many acquaintances but few close friends. Vaulen avoids loyalty to any communities, groups, or beliefs - he is most at peace with the freedom of existing as he is.
Vaulen is fairly peaceful and does not welcome violence without a good cause. He is very slow to anger and will hear most sides out, but he is true to his own vision of justice at the end of the day...which is sometimes a flaw. He is also flawed in his neutrality at times and does not take action despite arguably needing to.

His goggles are optional! They allow him to see magic and its ley lines. In his world, the effects of magic are apparent - floating rocks, summoned fire, etc. - but magic itself is invisible to the naked eye.