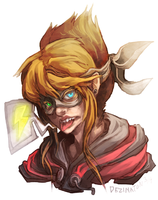 Slashes Superpowers: Ability to control light- including illusion/mirage powers, invisibility, shadow play and inflicting temporary blindness. Her life is also expanded along with having these light powers, but at a cost. When she's trying to make herself invisible, she must bend light around her and as a result cannot see due to no light being able to enter her eyes.

Backstory: Slashes once had a good life, with her family in a nice part of town, until she made the mistake of making a pact with a devil. With the pact, she was granted her powers of light, but ill luck plagued her. After her parents died as a result of her bad luck, she became traumatized and vowed to never let anyone close to her in case the same fate were to befall them. Instead of being taken into foster care, she decided to run. She became involved with the same petty thievery a lot of other kids her age were getting involved in as well- which is how she met the others. During her time alone wandering around, she would depend on the power of spreading rumors to discourage others out of approaching or challenging her. No matter how much she insisted they not let her live with them, they saved her life and she was convinced to stay. She has feelings for TAW but won't try and get close to him for fear of something bad happening. She is very very guarded if someone tries to ask about her past, only opening up to Saint on a rare occasion.

Personality: She's very self conscious and loves being indoors Hobbies: Playing her guitar, listening to music or smoking weed on occasion.