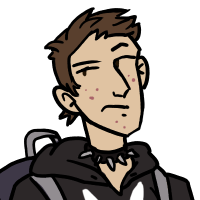 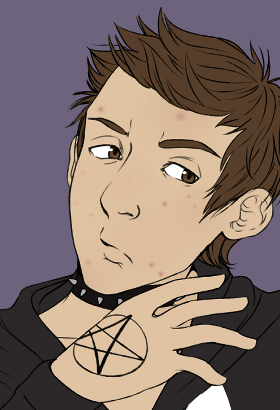 Tunes
Chop Suey! - System of a Down  St. Anger - Metallica 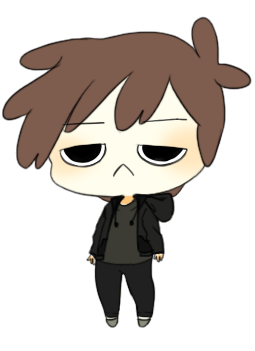 Somewhere in the space between Waldorf and Statler, Beavis and Butthead, and Pinky and the Brain, there lies Apocalypse and Nightshade-- or, as they're known by day, Jeremy and Trevor. The pair are friends who, when they're not dealing with the usual teenage problems like their asshole chemistry teacher, or their plot to usurp the tyrannical rule of the senior leading the anime club, are leading a secret double life. They could be mistaken for Catband's number one fans, but don't be fooled: they watch the band competition TV show strictly ironically, of course. The boys, under their pseudonyms, run a "Vote for the Worst" sort of blog where they pen glowing reviews of the show's least talented or most bizarre acts and try to raise fan support to keep them around, at the expense of the better acts.

Where his friend Nightshade (Trevor) is a wannabe gangsta, Jeremy is an edgy emo kid, the sort who thinks he's got the whole world figured out. Wake up, sheeple. Jeremy's the kind of kid who wears dog collars and draws pentagrams on his shoes and feels very persecuted when he inevitably gets sent to detention for breaking dress code. It's not really clear which of the two came up for the idea of the blog, but Jeremy's definitely the most strident about it, and determined to bring down this corrupt corporate music sham... or whatever he thinks the band competition is. Even if he almost maybe likes some of the music.

He kind of bullies Trevor, but Trevor is very trusting and not really sharp enough to realize-- and anyway, Jeremy thinks more highly of his friend than he'd ever admit.

Jeremy has the beanpole build of a boy who shot up like a weed when he hit puberty, and probably isn't done.

He dresses like a Hot Topic model, in black, ripped skinny jeans, his favorite rabbit skull hoodie, and abused gray sneakers he's written all over in Sharpie. The pentagram on his hand in his ref isn't a tattoo; it's just written in pen and isn't there all the time. 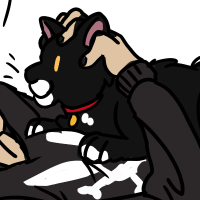 Jeremy is a middle kid in a big family with a number of kids and pets-- among them are most notably the rabbits they keep (he's fond of them, hence his hoodie) and Spooky, his fat old childhood cat.

Spooky (or Spook) has always been Jeremy's trusted confidante, and he's his favorite member of the family, always there to happily listen to Jeremy's problems. Spooky is "his" cat more than he's anyone else's in the family.

Spooky is mostly black, with white toe tips, a white button on his chest, white whisker pads, and a white tip on his tail.